The Advent wreath is one of the traditions that Christians live out in preparation for the Christmas Festivities. Advent Time this year started last Sunday 2nd of December and will last up to the 24th of December. Do you know what Advent means?

What Is Advent? History & Meaning

For many Christians unfamiliar with the liturgical year, there may be some confusion surrounding the meaning of the Advent season. Some people may know that the Advent season focuses on expectation and think that it serves as an anticipation of Christ’s birth in the season leading up to Christmas. This is part of the story, but there’s more to Advent.

The word “Advent” is derived from the Latin word adventus, meaning “coming,” which is a translation of the Greek word parousia. Scholars believe that during the 4th and 5th centuries in Spain and Gaul, Advent was a season of preparation for the baptism of new Christians at the January feast of Epiphany, the celebration of God’s incarnation represented by the visit of the Magi to the baby Jesus (Matthew 2:1), his baptism in the Jordan River by John the Baptist (John 1:29), and his first miracle at Cana (John 2:1). During this season of preparation, Christians would spend 40 days in penance, prayer, and fasting to prepare for this celebration; originally, there was little connection between Advent and Christmas.

Today, the season of Advent lasts for four Sundays leading up to Christmas. At that time, the new Christian year begins with the twelve-day celebration of Christmastide, which lasts from Christmas Eve until Epiphany on January 6. (Advent begins on Sunday that falls between November 27th and December 3rd each year.)  Advent 2018 begins on Sunday, December 2 and ends on Monday, December 24.

Advent symbolizes the present situation of the church in these “last days” (Acts 2:17, Hebrews 1:2), as God’s people wait for the return of Christ in glory to consummate his eternal kingdom. The church is in a similar situation to Israel at the end of the Old Testament: in exile, waiting and hoping in prayerful expectation for the coming of the Messiah. Israel looked back to God’s past gracious actions on their behalf in leading them out of Egypt in the Exodus, and on this basis, they called for God once again to act for them. In the same way, the church, during Advent, looks back upon Christ’s coming in celebration while at the same time looking forward in eager anticipation to the coming of Christ’s kingdom when he returns for his people. In this light, the Advent hymn “O Come, O Come, Emmanuel” perfectly represents the church’s cry during the Advent season:

While it is difficult to keep in mind in the midst of holiday celebrations, shopping, lights and decorations, and joyful carols, Advent is intended to be a season of fasting, much like Lent, and there are a variety of ways that this time of mourning works itself out in the season. Reflection on the violence and evil in the world cause us to cry out to God to make things right—to put death’s dark shadows to flight. Our exile in the present makes us look forward to our future Exodus. And our own sinfulness and need for grace lead us to pray for the Holy Spirit to renew his work in conforming us into the image of Christ.

One catechism describes Advent spirituality beautifully: “When the Church celebrates the liturgy of Advent each year, she makes present this ancient expectancy of the Messiah, for by sharing in the long preparation for the Savior’s first coming, the faithful renew their ardent desire for his second coming. By celebrating the precursor’s birth and martyrdom, the Church unites herself to his desire: ‘He must increase, but I must decrease.’” 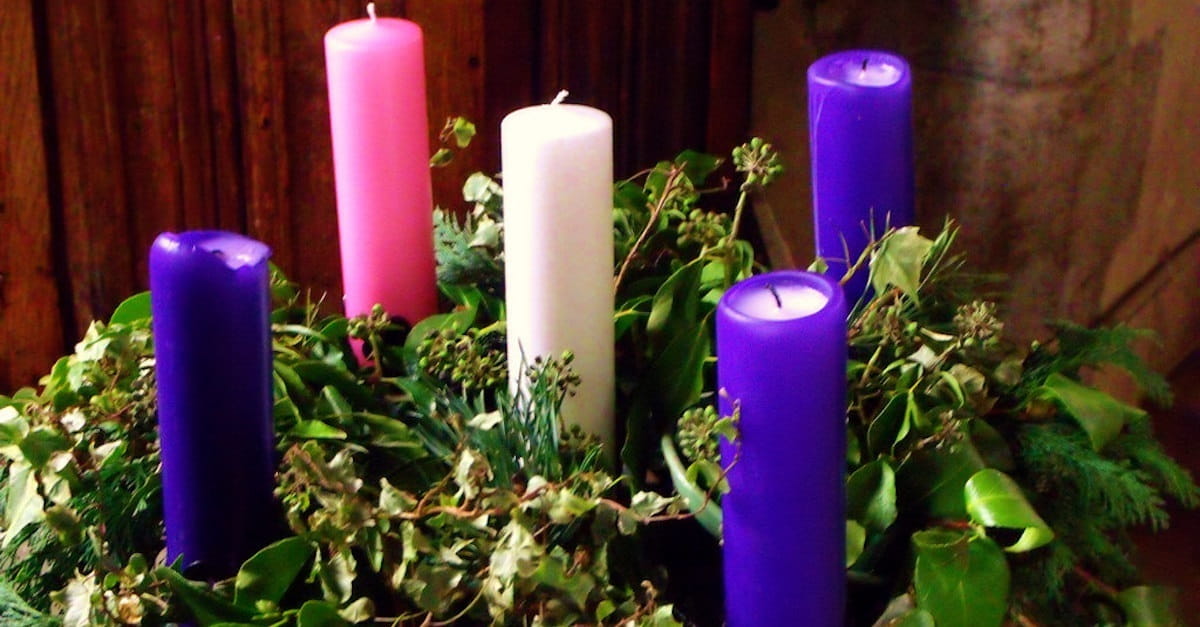 Eventually, the Advent wreath was created out of evergreens, symbolizing everlasting life in the midst of winter and death. The circle reminds us of God’s unending love and the eternal life He makes possible. Advent candles are often nestled in the evergreen wreath. Additional decorations, like holly and berries, are sometimes added. Their red color points ahead to Jesus’ sacrifice and death. Pinecones can symbolize the new life that Jesus brings through His resurrection. Families begin lighting a candle on the fourth Sunday before Christmas, and they light another candle each subsequent Sunday.

The most common Advent candle tradition, however, involves four candles. A new candle is lit on each of the four Sundays before Christmas. Each candle represents something different, although traditions vary. Often, the first, second, and fourth candles are purple; the third candle is rose-colored. Sometimes all the candles are red; in other traditions, all four candles are blue or white. Occasionally, a fifth white candle is placed in the middle and is lit on Christmas Day to celebrate Jesus’ birth.